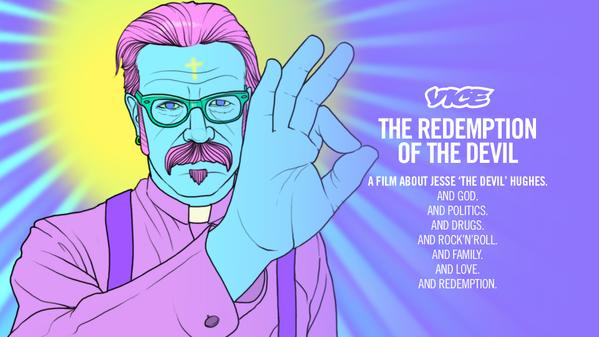 This documentary follows a year in the life of charismatic front man for the band Eagles of Death Metal, Jesse Hughes. He is many things; wild-man, political activist, worshiper of women, ordained minister, and father. Leading up to Hughes’, aka Boots Electric, fortieth birthday, he is preparing to record a new album, play solo shows, record his radio shows, and most importantly, trying to reconnect with his son.

As a big fan of EODM, I was looking forward to watching Redemption of the Devil. To me, Jesse Hughes has always come off as a cock-sure and confident rock n’ roller, with a desire to live up to the legend that comes along with that lifestyle. He is that, and so much more. The film is very candid, and of course there are moments that it seems the man called “Boots Electric” is playing it up for the camera. After watching, I don’t believe that is the case. Hughes has a bombastic personality, and his views and opinions mirror that. There is also another side to Jesse Hughes; devoted son who honors his mother’s beliefs by becoming an ordained minister, as he tries to tone down his hedonistic ways. He is also a tortured father, who desperately wants to see his son after being estranged for a year. At some points during the film, I thought to myself how amazing it would be to live this lifestyle, which were counter-balanced by the realization that things can sometimes slip through your fingers and the fun is not all it is cracked up to be. I really enjoyed Redemption of the Devil, and because of this, I see “Boots Electric” as a human being, and not just the charismatic wild-man you see on stage.