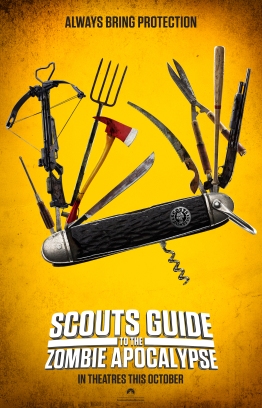 Scouts Guide To The Zombie Apocalypse (2015)

Three friends, and fellow Scouts, get set to go on their last camping trip. Plans are also in effect to ditch the camp out after dark and go to the biggest secret location party of the year. Much to the surprise of the friends, they walk right into the middle of a full-blown zombie outbreak upon their return to town. After enlisting the help of a stripper, the group races to find the secret location of the party to save their high school friends. Scouts are always prepared, but are they prepared for this?

Horror-comedy can be really good if done right. I went into this film with no expectations. I had not heard much about it besides seeing a couple teaser trailers. I must admit. I enjoyed Scouts Guide to the Zombie Apocalypse. The film knows it is a comedy and never tries to be serious. They follow the formula very well, and throw in some blood and guts for good measure. I found this movie very reminiscent of another good horror-comedy; Idle Hands (1999). Week after week, T.V.’s The Walking Dead slams us with an intense, end of the world zombie drama. Once in a while it’s nice to relax and laugh at hordes of undead. You won’t need your brain for this one, and that’s not a bad thing now and then.