When I was a kid, I was pretty much consumed by three things. Star Wars, WWF (now WWE) wrestling, and Marvel Comics. Besides my love for Batman, I was deep into Marvel. I would give anything a read, but for the most part I gravitated toward The X-Men and Spider-Man. This was awesome when Hollywood rolled out the red carpet for comic book movies back in the late 90’s and early 2000’s as Spidey and the X-men were the premier stories to be told on the big screen. The only thing that sucked was the fact that the rights to different Marvel franchises were scattered all over the major motion picture studios. I think each company had a piece; Sony had Spider-man, Fox took the X-men and Fantastic Four and Universal had the Incredible Hulk. You get the picture. All of this meant that we would probably never see any crossover of our favorite heroes. Marvel wised up and decided it was their best interest to start their own motion picture company in 2005. Disney then subsequently purchased them in 2009. Essentially, Disney owns pretty much every right except X-Men and all characters mutant-related (unfortunately that includes my personal favorite, Deadpool), and of course Spider-Man, and his cast of characters. But here is the good news. Marvel Studios now has a working relationship with Sony. This means Peter Parker, Aunt May, Green Goblin, and the whole gang will now appear in Marvel Studios productions, and vice versa. Sorry, I had to get that off my chest. I hope it makes sense, and IT IS important to my review on Captain America: Civil War because, you guessed it…our sneak peek at Spider-Man in his first appearance in a Marvel Studios movie. And to me, and I’m sure any Marvel purist, is an amazing (no pun intended) event.

The Avengers are heroes. They have time, and time again, saved Earth from all sorts of threats. There is only one problem. When they go into battle, they usually end up leveling a city and the result is loss of civilian life. After a recovery mission in Wakanda (fictional African country) goes south, and an incident occurs, several nations from around the world want the Avengers to be held accountable. The United Nations has demanded that all “enhanced humans” sign an accord to hold up their accountability. This causes a split right down the middle of the Avengers, with Tony Stark (Iron Man) and Captain America at odds with each other due to each of them having strong opposite beliefs. All hell breaks loose. This is all I can really say without giving story lines away. As far as comic book movies go, Captain America: Civil War is now at the top of the food chain. When I was a kid, I dreamed of things like this. This film is jam packed with so many elements and characters, that the one hundred and fifty minutes whipped right by. Usually with a giant ensemble cast, you loose some characters along the way. That is not the case. The film keeps gaining characters, and snowballs into a cinematic juggernaut. The special effects and battle sequences are seamless. Often I get lost in CGI and end up resenting it because of the distraction, but it just becomes part of the story in Civil War. The main battle sequence between the two feuding factions is dynamic and fluid, and I was fully engaged.

Captain America: Civil War also kicks off Phase 3 of the Marvel cinematic universe, which means we are exposed to new characters, and get to see a little more of a couple surprise favorites. Paul Rudd returns as Ant-Man, and is nothing short of clever and charming, as he was in his own film last year. T’Challa, the Prince of Wakanda is fierce and believable as Black Panther. The actor portraying Black Panther, Chadwick Boseman, is going to make a nice addition to the ongoing story. Last, but not least, we get our first glimpse at the new, and drastically improved Spider-Man. The other films starring Tobey Maguire and Andrew Garfield had their moments, but there was always something missing. Peter Parker is a kid, and the other Spidey movies lacked Peter’s boyish wonder and charm. Tom Holland now gets a turn at bat to play Peter Parker, and if his performance in Civil War is a glimpse into Spider-Man’s future, he is going to smack a home run. It will be fun to see how Sony and Disney work together to create a brand new world for the wall crawler. Although the Civil War has been tagged under the Captain America franchise, this was much more. All of the Avengers, old and new, are important pieces to the story. Only Bruce Banner (Hulk) and Thor are AWOL, but there is a good reason, which will be explained in the upcoming Thor: Ragnarok. We also get to see a lot more of Falcon (Anthony Mackie), Vision (Paul Bettany), and the stunning Scarlett Witch (Elizabeth Olson). It is quite a stellar cast, lead by Chris Evans (Captain America) and Robert Downey Jr. (the always dashing Tony Stark/Iron Man). It is actually quite impressive that Marvel Studios has amassed a roster of actors this deep and talented on an ongoing basis. The directing team of brothers Anthony and Joe Russo are given the task to put together this enormous puzzle, and the do an amazing job. They were also in charge of Captain American: Winter Soldier, which to me right up on top of my favorites list. The Russo’s are given many more moving parts with this sequel, and make an even better film. Because they are also in charge of the next two Avengers films, expect nothing less than pure enjoyment. 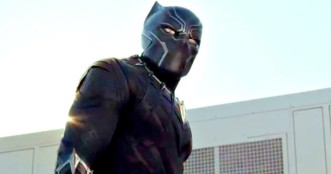 A fine addition to the Marvel cinematic universe; Black Panther.

As I read this back to myself, I sound like a fan boy. I forgive myself, because that is exactly what I am. I remember being ten years old and reading Marvel’s Secret Wars. It was a limited issue mini series that basically put most of the Marvel heroes and villains on a planet by a being called the Beyonder. The Beyonder essentially wanted to see the two sides fight it out. Captain America Civil War is not Secret Wars, but it is a gigantic step towards amalgamating these characters into one universe. Now wouldn’t it be something if Twentieth Century Fox and Marvel/Disney could work something out so maybe one day we could see a big screen Secret Wars. The X-Men and Marvel’s Avengers sharing the same universe? Maybe that’s just wishful thinking from lifelong fan boy, but hey, crazier things have happened. The closest thing we have right now is Captain America: Civil War. Don’t walk, but run (or fly if you are an “enhanced human”) to the cinema. You will not be disappointed.

After discovering that he has terminal cancer, mercenary for hire Wade Wilson is offered to under go an experimental procedure that can save his life, and also give him extraordinary powers. After being lied to and left for dead, Wade discovers he has gained the ability to rapidly heal from injuries. He also left with an appearance only a mother could love. Hell-bent on seeking revenge, Wilson dawns a mask and costume, and takes the moniker “Deadpool”. Along side some familiar “allies”, a quick wit, and armed to the teeth, “The Merc with the Mouth” goes on a killing spree in search of the people who turned him ugly.

Anyone who is a fan of the Deadpool character as he is represented in the Marvel Comics universe knows that the film is actually a pretty close adaptation and stays true to the character. I looked forward to seeing this film as soon as the test footage was leaked a couple years back. I am a fan of the comic book. The “breaking the fourth wall” shtick (Deadpool is aware he is in a comic book and acts accordingly) was, and still is a fresh approach. The movie takes advantage of this, and it is brilliant. This is Deadpool with the gas pedal pinned to the floor. From what I have read, this was Ryan Reynolds’ passion project, and he is brilliant. You could scour the world and not find any actor to play the part of Wade Wilson better than my fellow Canadian. From the humor, action, charm, and countless Easter eggs (intentionally hidden message, or inside joke) that are contained in Deadpool, it’s a hell of a good time at the cinema. I can see this being a movie I can watch time and time again, and still be impressed. I can only hope that Twentieth Century Fox and Marvel Studios have enough sense to add this character to future X-Men based films, because honestly, they have become dry. This is a great example of what can be accomplished when the studio loosens the reigns and lets the creativity flow. What I am trying to say is Deadpool is awesome. At the risk of sounding blasphemous, I may have enjoyed it a little more than The Force Awakens, and I loved that film.