At some point in a young man, or lady’s life, they want to become a rock star. Which kid does not want an electric guitar? A lot of people give up when they realize it is mostly just a pipe dream. There are those who stick with it and actually learn how to play the guitar. I got the bug when I was fourteen, and picked up my first six string; an awfully indistinct Squire Stratocaster. I stuck with it for the most part, and twenty five some years later I still play and enjoy it. Every aspiring musician needs a hero. A player to aspire to. For me, I have many guitar inspirations. For the sake of not getting too carried away, I will keep the list of guitar players to a minimum. This list is not based on technical skill. Skill is good, but there are so many other factors that go into these decisions; look, feel, sound, and cool factor all go a long way. Here is my list, in no particular order.

Tony Iommi (Black Sabbath, Heaven and Hell)  This is the man that created heavy music as far as I’m concerned. Armed with his signature Gibson SG, Iommi’s guttural guitar sound changed popular music. His down tuned (one and a half steps) came out of necessity as he lost the tips of his fingers in a work accident. The looser strings were easier for him to bend. One of the first songs I learned was the Black Sabbath Classic Iron Man, and I still enjoy playing many of their other songs. As Sabbath winds down their extraordinary career, Iommi still goes out on stage every night and kills it. Not to mention this legend has been battling Lymphoma, and is currently in remission. So many bands and guitar players owe Tony Iommi and Black Sabbath for having the success they have.

Pepper Keenan (Corrosion of Conformity, Down) I love the dirty southern sludge guitar sound, and Pepper Keenan knows how to create some swampy stoner rock riffs. When I first hear Down‘s NOLA many moons ago, I fell in love with the sound. Soon after that, I discovered Keenan played a Gibson Firebird and I was sold. His playing fits in with modern metal, but he would also fit right in with classic southern rock bands like Lynard Skynard. He runs a lot of the same effects pedals that I use or used to use on my board. Pepper also owns a bar in New Orleans called Le Bon Temps Roule. This is one pretty cool guy, not to mention a hell of a guitar player.

Buzz Osborne (Melvins, Fantômas, Crystal Fairy) King Buzzo! Perhaps the man responsible for the “Seattle sound” that came roaring into popular culture in the early nineties, this man, along with Melvins drummer Dale Crover, has been the one constant in sludge music for nearly three decades. Buzz is unique from top to bottom; his look, his playing style, right to his political and social views. Perhaps what I admire the most is the respect he receives from his peers, as he is always collaborating with other artists such as Mike Patton, Tool, and Jello Biafra. Just to add to his mystique, my friend Earl and I went to see a Melvins show a few years back. As we were coming into the club, King Buzzo was walking in. Earl got excited and grabbed Osborne by the arm (in a non threatening way). Buzz responded with one of the most amazing death stares I have ever witnessed.

Matt Pike (Sleep, High On Fire) To put it mildly, Matt Pike is a beast. If this was an alternate universe, he’d be slaying dragons. He writes the heaviest riffs, and has the voice to match as the guitarist/singer for one of my favourite bands, High On Fire. I should mention that he is also guitar player for doom metal giants Sleep. He is all that, and does it never wearing a shirt while performing live. I have had the pleasure of seeing both High On Fire and Sleep perform in person, and they are among two of the best shows I can recall. If you are interested in getting your feet wet in the doom/stoner metal genre, listen to Sleep’s Dopesmoker. I feel it is a genre defining record, and Matt Pike is at the helm.

Joshua Homme (Kyuss, Queens of the Stone Age, Them Crooked Vultures) There was a time about fifteen years ago where I kind of lost interest in playing guitar. I just wasn’t feeling it. Then I heard Queens of the Stone Age debut, self-titled album. I was suddenly interested again. I can safely say that QOTSA is my favourite band of all-time. Perhaps Joshua Homme is the biggest influence on my playing. Some people say he is arrogant, a little bit of a prick, but those people also haven’t made albums with guys like Dave Grohl, John Paul Jones, or Iggy Pop. Homme’s sound is always evolving, and his song writing just gets better. In a sea of endless alt-rock and pop garbage, QOTSA and Homme’s other projects prove that rock ‘n roll still has a pulse. For a kid who played polka music on the guitar for his first two years of lessons, he does pretty good for himself. Oh, and he is also the drummer for Eagles of Death Metal. I’ve said enough.

Electric Wizard – Devil’s Bride (from the album Electric Wizard, 1995 Rise above Records) If you like your music full of heavy, grinding guitar riffs, Electric Wizard is is the perfect remedy for what ails you. These British purveyors of doom have been recording brilliant sludge for twenty years. Their lyrics speak of witchcraft, horror movies, and marijuana, which seems to be a common theme among bands of this genre. The song Devil’s Bride is no different as the band speaks of the woman whom Satan has chosen to bear his child. Bloody lovely. Electric Wizard came along when the doom, stoner rock scene was just beginning to pick up main stream awareness, but they have also managed to stay somewhat underground. This is one band that I have not had a chance to see live, but I would jump at the opportunity.

The video is accompanied by scenes from the 1967 film The Devil Rides Out.

Kyuss – Un Sandpiper (from the B-side of the Gardenia single, 1995 Elektra) In my opinion, this song features the quintessential Kyuss line up of John Garcia (vocals), Joshua Homme (guitar), Scott Reeder (bass), and Brant Bjork (drums). Un Sandpiper is a great example of the sound these guys created in the California desert. If this song does not have your head bobbing two seconds after the drums kick in, you are probably hearing impaired. The impact this band has had in my personal listening habits can not be measured. Kyuss has spawned many amazing bands, and their influence is undeniable. 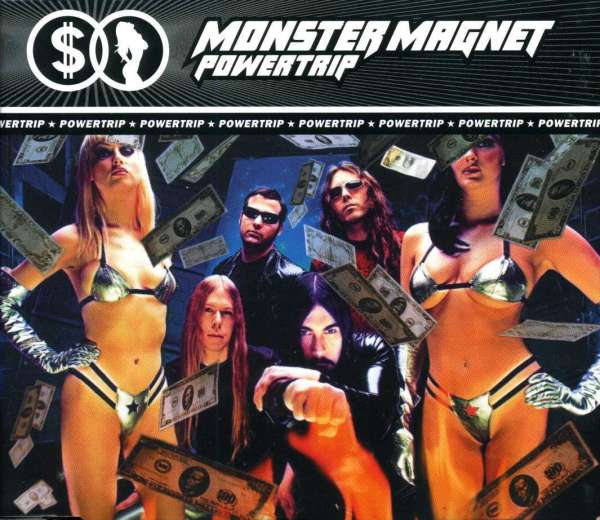 Monster Magnet – Crop Circle (from the album Powertrip,1998 A&M) For me, Monster Magnet is one of those bands that I always forget about for a little while, but then I’ll hear a song and think “Why do I not listen to this band more often?”. From Red Bank, New Jersey, these stoner veterans have been around since the late 1980’s. I am a fan of (former) guitarist Ed Mundell‘s sound and tripped out space guitar sound, and try to incorporate some of his sound into my own guitar set-up. Singer/guitarist Dave Wyndorf is the one constant member since MM‘s inception, and has written some pretty amazing songs in than span. The fourth studio album Powertrip is a hell of a trip, and my favorite Monster Magnet album. Enjoy.