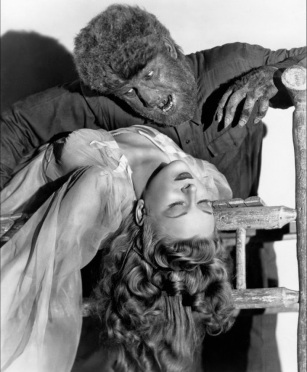 Movies based upon the shape-shifting, village terrorizing beasts are far and few between. Although most of them are pretty terrible, once in a blue moon (pun fully intended) you get one that is a real howl (that is TWO puns in one sentence, for those keeping score).

1)  An American Werewolf in London (Dir. John Landis, 1981) This dark comedy/horror is the top dog of all werewolf films. Two American students are hitching through Northern England, and are mauled by an unknown beast. One man is killed, while the other survives. He wakes up in a London hospital to realize that he is no longer the man he was before the attack. David Naughton and Griffin Dunne are stellar as the college friends who end up in the wrong part of the Yorkshire moors. American Werewolf has three things I admire in a film; dark comedy, disturbing imagery, and savage violence.

2)  Ginger Snaps (Dir. by John Fawcett, 2000) Outcast sisters, obsessed with the idea of death, try to navigate their teenage years. Things get even more complicated when one of them bitten by a werewolf. As Ginger, who is bitten, becomes more of a danger, sister Brigitte must find a cure before it is too late. The performances by Emily Perkins and Katharine Isabelle are real and convincing. The story is surprisingly original and darkly twisted. Also, Ginger Snaps is a Canadian production, and me being a proud Canadian makes me like it even more.

3)  Dog Soldiers (Dir. by Neil Marshall 2002) A company of British soldiers are sent on a weekend training mission in conjunction with a Special Forces unit in the Scottish wilderness. As it turns out, this will be anything but a routine military exercise. The soldiers discover the remains of the Special Forces team, and realize they are being hunted by something that is not human. They hole up in a farmhouse and try to keep the beasts at bay until the sun comes up. This is a gritty, violent film with some good twists, and lovely special effects that kept me interested from the start. The portrayal of the British soldiers is very believable. A very original movie directed by the great Neil Marshall (Descent, Doomsday).

4)  The Wolf Man (Dir. by George Waggner, 1941) Along side Dracula and Frankenstein, The Wolf Man is a cornerstone in the Universal Monsters franchise back in the golden era of cinema. This true classic is the Story of Lawrence Talbot (Lon Chaney Jr.), who returns home to Wales upon the death of his brother. During a visit to a gypsy camp, Lawrence saves his friend Jenny from a wolf attack, but is bitten during the struggle. Talbot is now cursed, and transforms into a werewolf during each full moon. Lon Chaney Jr. is amazing as the man burdened with the fact that he is no longer human. This was one of my favorite movies as a kid, and continues to inspire me to this day. The Wolf Man runs really short at seventy minutes, but that does not take away from it’s legacy.

5)  WolfCop (Dir. by Lowell Dean, 2014)  Another gem of a Canadian film, everything about WolfCop is ridiculous. If you are a small town police deputy with a pretty severe drinking problem and really nothing to look forward to, what do you do to turn things around? Correct, you become a werewolf. Lou Garou is no ordinary werewolf. He is a Wolf cop with a strong sense of the law and a lust for the ladies. This movie had me once the scene came on where WolfCop makes love to a lucky gal while the song “Moonlight Desires” by Canadian legend Gowan plays in the background. He also rips a dude’s face of during one scene. Pretty impressive, very ridiculous.